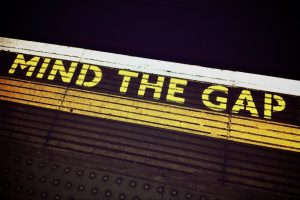 If you’ve been to London and travelled on the tube you’ll remember the frequent reminders to ‘mind the gap’ between the platform and the tracks. As I’ve been travelling around London recently, this message has been playing on my mind, but in a different context.

We are often reminded to look after ourselves in a safety context, and yet there are other gaps that we need to watch out for.

And one of the biggest – the gap between our desired behaviour and our actual behaviour.

We all like to think of ourselves in a positive light – that is, as a ‘good person’. We hold this image – using it as a reference point when we make decisions and constructing an internal dialogue to maintain it.

And yet, our behaviour is influenced by a whole raft of factors which means we may not be as good as we think we are.

In psychology, the terms ‘espoused values’ and ‘values in use’ are used. These terms were coined by Argyris and Schon in 1974.

Your espoused values are the values you talk about. You might say you value honesty. Yet, if you are given an honest answer to a question such as “Have I put on weight?”, and the answer is “yes” you may not be happy with the response.

Your response is your values in use. Your values in use are the values that you use every day when you do things. For example, you might say you value the environment but not recycle or do anything to improve the planet’s health.

In many aspects of life, there can be a gap between the two.

Your behavioural choices get even trickier when you realise that the act of doing something good, which usually makes you feel good about yourself, then (oddly) gives you permission to be not so good later.

For example, you may have had a highly productive morning and so you decide to cruise through the afternoon, or because you went to the gym in the morning you give yourself permission to have that piece of cake.

This ‘moral licensing’ means that a good deed at one part of the day, which boasts your image of yourself, then creates the permission to do something that isn’t good later in the day.

Think of it like a series of checks and balances. Your brain has an image of yourself and wants to maintain that image, and so it keeps score of the ‘good’ and ‘bad’ behaviours. You earn credits for good behaviours and debits for not so good behaviours, with the eventual aim of balancing the scales.

Often this happens subconsciously and because we have a strong urge to maintain an image of ourselves that is good, we rewrite the narrative that accompanies behaviour that isn’t congruent with who we think we are (or want to be).

So what safeguards can you put in place to mind the gap?

As the Dalai Lama said, “Open your arms to change, but don’t let go of your values.”